RAF Binbrook was opened as a Bomber Command station in June 1940 during the Second World War home to No. 12 Squadron RAF which operated between 3 July 1940 and 25 September 1942 before moving to RAF Wickenby. The squadron operated the Vickers Wellington Mk II and III. Another squadron to use Binbrook before 1942 was 142 which initially operated between 3 July 1940 and 12 August 1940 with the Fairey Battle and left for a short time before returning on 6 September 1940 and going to RAF Waltham on 26 November 1941. The squadron used the Battle until November 1940 before switching to the Wellington Mk II.

RAF Binbrook closed in 1942 for the installation of three concrete runways, reopening in 1943 as home to No. 460 Squadron, Royal Australian Air Force. Post-war, Binbrook was home to a number of distinguished RAFbomber squadrons, notably IX, 12, 101 and 617, all four of which were there for more than a decade.[5][6] The airfield saw the start of the RAF’s transition to jet bombers with the arrival of the first English Electric Canberras.

We have been developing the nissen huts into greenhouses, we also are restoring several buildings for our packing and offices.  The work started July 2017.

The task was not easy considering the state of disrepair: 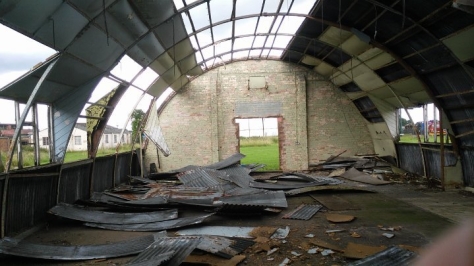 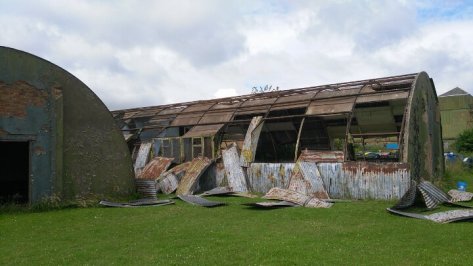 As quick as we were making space we were filling it with plants:

Once the tin was removed we then went about the very difficult task of covering the nissen huts in plastic:

This process is happening slowly as we are doing the work ourselves but it is changing every week.

Quality growers of pond plants, from lilies to bulrushes, from floating plants to deep water.